The population of Yemen is to a high degree homogeneous. All Yemenis are ethnic Arabs with a strong tribal ancestry. The only distinction is whether a tribe has an affiliation with the Sunni (Shafi) Islam or the Shia (Zaidi) Islam. There is also a small minority of Shia Ismailis. There used to be a large number of Jews, but at present the Jewish community number only one or two thousand.

The state religion in Yemen is Islam. Mainstream Islam – Sunnism – has been predominant in the south and east since the advent of Islam in the sixth century. Yemeni Sunnism follows the Shafi religious law school, which is the second largest of the four existing Sunni law schools. Throughout history, there has been little religious conflict between Shafis and Shia Yemenis, neither being extremist religions. In general, Yemenis are rather tolerant.

However, since the 1970s, Saudi influence is growing. Many Yemenis have worked in Saudi Arabia, some of them adopting puritan Wahhabism, or Salafism. Saudi Arabia has financed a large number of Wahhabi schools – formally called scientific centres – in Yemen, where Yemeni youth is educated according to Wahhabi beliefs. Wahhabi Salafism is not very tolerant toward Shia Islam, denouncing it as a religion of Kaffirs or unbelievers.

A growing number of Yemenis follows Wahhabi Islam. The movement is strong and appealing, as it offers its followers access to schooling, medical services, and business opportunities. Throughout Yemen, mosques are converted to Wahhabism by appointing Wahhabi imams. When tribal sheikhs ‘convert’ to Wahhabism, the whole tribe is converted along with them. Exact numbers are unknown, but the Sunni share of population has consequently increased from half to more then three-quarters of the Yemeni population.

The Zaidi sect of Shia Islam has long been dominant in Yemeni politics. Zaidism is a sect or branch of mainstream Shiism, arising from a dispute over leadership concerning the fifth imam. Zaidis are therefore also called ‘fivers’, as opposed to the Shia mainstream ‘twelvers’ (followers of the twelfth and last imam) and the Ismaili sect of ‘seveners’ (arising from a dispute over the succession of the sixth imam). Compared to mainstream twelver Shiism, Zaidi Islam is considered to be rather moderate, its doctrine similar to Shafi Sunnism. In the past, purely theological disputes between Zaidis and Shafis have seldom led to conflict.

Invited as a mediator by quarrelling tribes, the Zaidi imam travelled from north Iran to Yemen in the tenth century. The leading northern tribes have supported Zaidism ever since, adhering to the Zaidi imam as religious and political leader, while retaining tribal – or territorial – autonomy. This led to a theocracy – akin to a caliphate or a kingdom – that was kept in place until 1962. At times, the rule of the imam extended well into the Sunni south, tribes sometimes switching their affiliation from Shafi Sunnism to Zaidi Shiism and back to Sunnism. The seat of the imamate switched between Sa’adah and Sana’a, and even to southern Taizz.

The revolution of 1962 ended the Zaidi imamate. Since then, Zaidi influence has gradually decreased, many tribes switching back to Shafi Sunnism, or to the Salafi movement of Wahhabism. The complex arena of Yemeni tribal politics is characterized by constantly shifting positions and alliances. Again, exact numbers are unknown, but within three decades the Zaidi share of the population has dwindled from 50% to 25% or less. In the far north, loyal Zaidi tribes (also called royalists, as they followed the ‘regnal’ Zaidi imams) began to oppose the more penetrating doctrine of Wahhabism, as mosques, religious communal lands and funds (waqf) were shifted to Salafism at the end of the twentieth century. The present government supports this shift to Salafism, seemingly because it helps to weaken the influence of the royalists, their former foes in the revolutionary war. The Zaidi uprising has culminated in a full-scale guerrilla war which is being waged around Sa’adah since 2004. It is slowly expanding southwards. In May 2008, the war even reached the environs of Sana’a.

Judaism came to Yemen with Jews migrating from the vicinity of Jerusalem after the destruction of the temple by the Romans, in the first century a.d. In fact, in pre-Islamic times, Judaism – on and off with Christianity – dominated significant parts of Yemen, local rulers converting to Judaism and Christianity. The most famous Jewish ruler was Yusuf Dhu Nuwas, a Himyari king who ruled from Zafar in the sixth century. Dhu Nuwas reportedly persecuted Christians, in reaction to the persecution of Jews by the Byzantine emperor in the north of the Middle East. Dhu Nuwas’s rule was eventually ended by a large Christian Ethiopian force.

Judaism and Jews stayed in Yemen. After Islam took over, Jews were granted the status of dhimmis; protected by Muslim rulers, but without full civil rights. Jews were not allowed to ride horses, wear colourful clothes or to build houses that were taller than Muslim buildings. As a result, they built cellars, in which they could also store wine, that they were allowed to drink. Orphaned Jews were often converted to Islam. In the nineteenth century, Jews were given the degrading task of cleaning public baths, toilets and sewers.

At the beginning of the twentieth century, there were some 80.000 Jews in Yemen, spread over 1.050 communities, predominantly in Zaidi areas. As many professions were forbidden, Jews in Yemen made a living as artisans and craftsmen: jewellers, weavers, silversmiths, shoemakers. This resulted in the paradoxical situation that first-class Muslim citizens were highly dependent on second-class Jewish citizens.

By the end of the nineteenth century, migration – or aliyah – to Palestine began. At first only a few families went, but when the state of Israel was founded, the interest of Yemeni Jews grew. In 1950, with the consent of the Yemeni imam, the government of Israel mounted Operation Flying Carpet, airlifting between 35.000 and 50.000 Jews from Aden to Israel. Many Yemeni Jews perceived this as the fulfilment of God’s promise to end the suffering and diaspora.

Their reception in modern en secular Israel was somewhat of a disappointment. There was little demand for the knowledge and skills of these Jews, who often did not speak the Hebrew language. Yemeni Jewry consequently fell into the lower social classes in Israel, together with black Ethiopian Jewry. The Yemeni Jewish migration has continued throughout the years.

Box: Up to a few hundred – some say two thousand – Jews remain in present-day Yemen, mostly in the town of Rada’a and north towards Sa’adah. They still work as artisans and craftsmen. In Rada’a, for instance, Jews dominate the door welding industry. In Sana’a, the former Jewish neighbourhood of Al-Qa is now entirely inhabited by Yemeni Muslims, apart from one old Jewish lady. Remnants of Jewish presence are scant. In 2007 and 2008, Yemeni Jews were reportedly threatened by Zaidi militants in Sa’adah. However, analysts view this as an attempt by the government to rally western support for the subsequent attacks on Zaidi rebels.

The Ismaili branch of Shia Islam arrived in Yemen with the Fatimid Empire, that ruled from Egypt from the eigth till the tenth century. Ismailis (sometimes referred to as ‘seveners’) originally differed from mainstream Shiism on the topic of succession of the sixth imam. However, they have since drifted towards a more liberal religion, branching off into a number of different sects. Ismailiyya has tended to spread eastwards, to India and parts of Iran, but enclaves can be found in countries such as Turkey, Syria and Yemen. Only one or two percent of Yemenis call themselves Ismailiyya. The Yemenis also call them Al Bokhra. Al Bokhra are renowned merchants, with their own market in the vicinity of Bab al Yemen, the main entrance of the old city.

Box: Ismaili villages are mainly found in the high Haraaz mountains, an hour’s drive west of Sana’a. The village of Al Hoteib – just 5 kilometres from Haraaz’s capital Manakha – is a famous pilgrim site, visited mainly by Indian pilgrims belonging to the large Indian branch of the Ismaili sect of the Sulaymanis. In Al Hoteib, they visit the tomb of Hattem bin Ibrahim bin al-Hussein al-Hamdani, a sixteenth century Ismaili scholar. The scenic surroundings are covered with coffee shrubs. Harazi coffee is a famous coffee brand in Yemen, Ismaili coffee being the top brand.

Banner: ‘It is at any rate certain that in the sixth and early seventh centuries Jews swarmed into the Hejaz and Yemen and that, moreover, a great movement of proselytism had taken place and was still in progress.’ (Robertino Solàrion, The Apollonius Of Tyana & The Shroud Of Turin)

Banner: ‘Government actions to counter an increase in political violence in Sa’ada restricted some practice of religion. In January 2007, for the third year, the government banned the celebration of Ghadeer Day (a holiday celebrated by Shia Muslims) in parts of the Sa’ada governorate.’ (Yemen Times on the freedom of religion report) 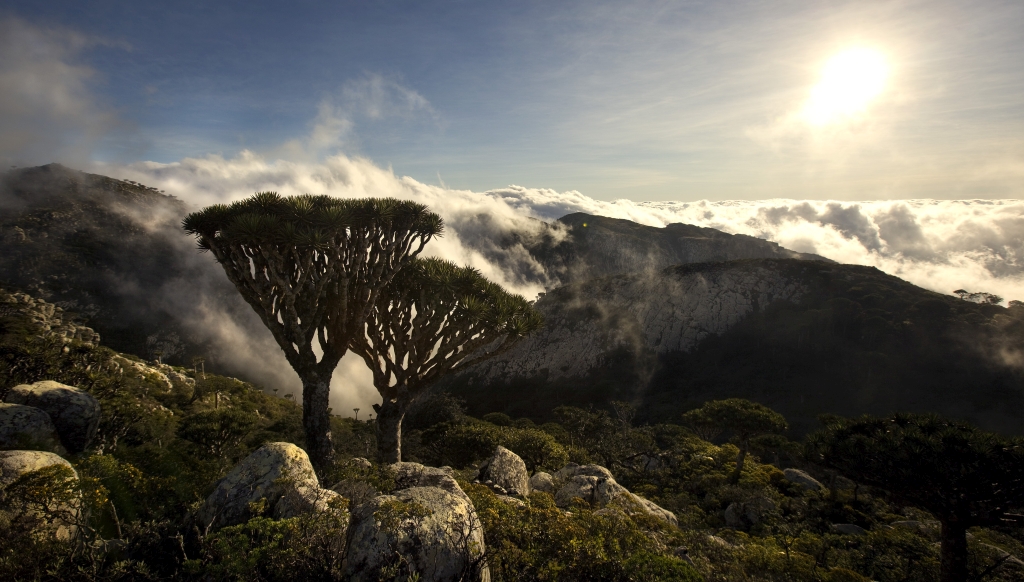